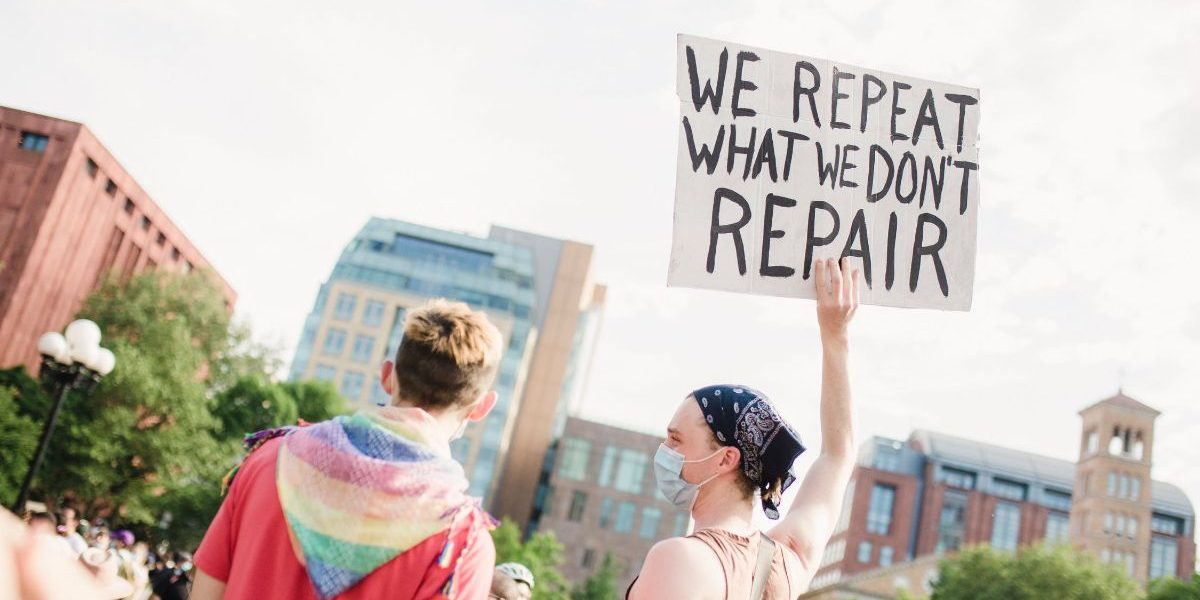 Two years ago, prompted by the murder of George Floyd at the hands of a white police officer in my beloved Minneapolis hometown, I wrote a blog titled, “I Haven’t Done Enough.” In it, I wrote that I want to be part of the solution, and I pledged to do more to fight racism, white supremacy, and inequality. Since then, I have devoted one hour a week to antiracism efforts, including attending trainings and participating in small group discussions, writing elected officials, donating funds, and attending protests. Mostly I have been reading and journal writing. One hundred hours, two years out: here is my humble update. I apologize in advance if I inadvertently offend or omit. Please reach out if I do. I am listening and learning.

Two books that stand out are My Grandmother’s Hands by Resmaa Menakem and Layla F. Saad’s Me and White Supremacy. One of the most profound things I’ve come across thus far comes from Menakem, who says that to eradicate racism, all of us need to address our own individual and collective trauma. For decades I have understood that attending to our trauma benefits not only ourselves but also our descendants. What blows my mind is that Menakem says it goes the other direction as well. It’s as though our ancestors let out a huge collective sigh of relief as we heal. We’re the ones they’ve been waiting for. We now possess the knowledge, resources, and wherewithal to address individual and collective trauma as never before in known history.

Exploring issues as loaded and shame-inducing as white privilege and internalized racism is difficult. While sitting with my journal pondering challenging questions, it’s not uncommon for me to feel the urge to take a nap. When speaking about racism, I find I’m often tongue-tied. The pull toward avoidance is strong indeed. This is part of why so many well-meaning white people ignore white supremacy. “If we don’t give racists attention, they’ll go away,” is the theory and hope. Unfortunately, this approach does not work. In fact, it provides white supremacists cover to continue their work. It allows them to recruit and build power. White nationalism must be called out and actively resisted. Black, Indigenous, and People of Color (BIPOC) organize protests all the time. Too often white people disregard them. Because it’s harder for white people to ignore it when other white people actively protest racism, white people must get off the sidelines.

One journal prompt in Me and White Supremacy asks, “What new core values and beliefs will you need to integrate to better practice lifelong antiracism?” With much help from Antiracist Table’s 30-Day Challenge by Kirsten Ivey-Colson and Lynn Turner, here are portions of my responses:

Given these values and how much I’ve gained thus far, I plan to continue devoting at least an hour a week to antiracism efforts. It’s also become clear that I need to move beyond my own personal exploration and engage more with others. Thus, this past weekend I began initiating conversations about antiracism with other white people. Talking alone, of course, is not enough. But it is my hope that if enough of us engage in similar conversations all across the land, we’ll motivate one another to do the hard work of dismantling racism. Even if it might not be enough, fearing that I might unintentionally offend, and owning that in many ways mine is a life of privilege, I pledge to continue humbly doing what I can. And I invite you to join me.

Have a conversation with a friend or family member in which both of you explore the following questions. Listen deeply and speak from the heart.